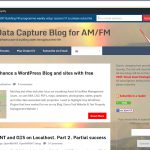 Background I am closing down one of my web hosting sites, and have migrated to another site with the same blog and revised demonstration site. Although I have had the new site up and running for a month or more, and have informed people visiting the original blog to check out the new site, there
Read More 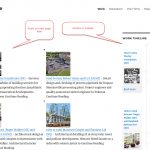 After having a Curriculum Vitae that just listed my jobs/experience I decided to develop an on-line CV with timelines and images. See maxdrake.tk for my resume. There are a number of free and paid Timeline plugins which I tested, I used this blog to find free plugins. After testing some of them out that took
Read More 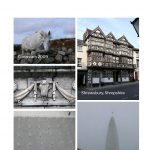 I have been a casual/semi-enthusiastic photographer for years, and have found that I have lots and lots of photographs at the moment. I decided to create a portfolio of my work on the web. One of my interests in building the site was how to manage large sized images and how they looked and loaded
Read More

There’s a Plugin for that! My blog and some of my other web sites focus on visualising Asset & Facilities Management issues , so uses BIM, CAD, PDF’s, maps, databases, photographs, tables, graphs and other data associated with properties. I want to highlight Free WordPress Plugins that have worked for me on my Blog, Demo
Read More

The idea was to alter an existing Real Estate Site to a Asset Property Management Site in WordPress using free Templates/plugins. Go to apriori.ml to view the demonstration site. This has now evolved a bit as I can see extra things that I think  I want to do and add to the site. From the
Read More

The demonstration site, which uses examples of different free plugins to demonstrate different features, can be found at apriori.ml. Looking at the WordPress themes (free ones of course) I saw there were quite a lot of real Estate Themes and Plugins and I wondered if you could adapt one of these to be a property
Read More

I see panoramic 360/180 pictures as an extremely useful tool for Facility Management. As an Architect who goes to site to capture information on existing buildings and sites, the frustration of having a photo cut off just where you wanted to see something just outside the normal picture frame, usually requiring a 2nd visit to
Read More

Following on from the localhost setup and the post at the beginning mentioning the issue of working on localhost but not on Server that tends to hint that the issue is with the windows server rather than the openMAINT email setup. From localhost setup I found that SSL was required. So that rather negated my
Read More
PowerKey4Revit